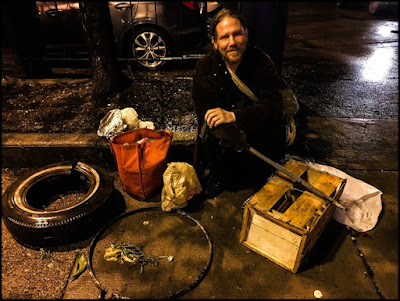 This is Mark, Mark Buffington. Like Washington only with Buff like Buffalo in front of it, he told me. I had stopped out for a couple beers tonight and was on my way home. That's when I met him. The tavern I had gone to had an open mic and I was enjoying the impromptu musical creativity. Then when I left and began to cross the street I heard another rhythm, a sort of tapping. So I went over and met Mark. He was "playing" all these random things. The only actual instrument was a harmonica. Resourceful, I thought. He's been on the street "for a while," he told me. Ever since his girlfriend kicked him out. "It doesn't make me a bad person, I've not done anything bad," he also added. And I concur, being on the street doesn't make you a bad person...things happen. He told me he felt things will get better soon, that he's okay. I asked him about his health (because I could see that he kept his one hand covered, and that it was crooked), and he told me that he was doing okay, that the doctors at Roswell (cancer institute) are giving him a clean bill of health. We talked for a while, and he played me a couple numbers on his stuff. Never once did he ask me for money. When I offered him a couple dollars worth of change he took it. And when he did he shook my hand with his bent one and said "Thank you brother; God bless you." Then we parted. As I walked away I could hear his tapping...on an old tire, a wooden crate, and also I heard his harmonica. A couple blocks later as I put the key in my front door I felt grateful. Not only for my ramshackle house I call home, but also that my path crossed with Mark Buffington this evening. My life is enriched because of it. 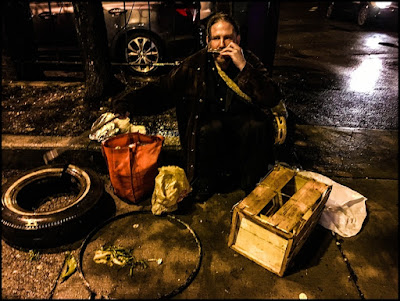