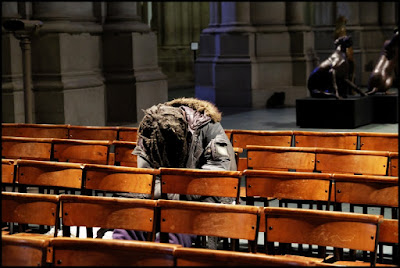 Inside the immense Cathedral St. John the Divine
Her voice was rather loud for such a petite elderly woman, I thought when finally seeing her. I could hear her before I saw her. It’s because I was seated and the subway car was crowded. The car fell silent as she squeezed through people while belting out her spiel, “I’m homeless and my only income besides begging on these cars is collecting bottles and cans,” she said. “Please, from the bottom of your heart, anything will help. I’m a human just like you,” she added.

There was no loose change in my pocket and I knew that the only denomination in my wallet were twenties, which I would not hand off. When she passed by me I was surprised at how average she looked. If not for her pleading I would never have guessed that she was homeless. “There’s probably 75 people in this car and no one can find it in there heart to offer me even a small amount of change,” she questioned? The car was silent, not a single person gave her anything and when she passed I couldn’t look her in the eyes. I was on my way back downtown after visiting the largest church in Manhattan, the Cathedral of St John the Divine.

In a recent philosophy class we were taught to question everything, especially our actions and motives. The German philosopher, Immanuel Kant, is said to have gone so far as to question his questions. So what is it, I sometimes question myself, that draws me to offer the homeless and street people compassion?

Spending my formative years in a public housing project, our family was poor but I didn’t know it. It wasn’t until later, after my dad had passed and we were living in the suburbs, when I received free subsidized lunches that I became aware of it, embarrassed by it. It was while living in the projects that a young friend of mine (we were probably 10 years old) told me that before moving into their current apartment, his family lived in a car for 6 months. It was also around this time that I first saw someone sleeping under a bridge, which was on my way to grade school. But still I question my motives.

In New York City this past weekend I was overwhelmed by the stark contrast between wealth and poverty. Homeless encamped outside stores that are telling us we need what they have, some sleeping in the city’s beautiful parks, and also sleeping in churches whose steeples seem to touch the clouds. Most were not as vocal as the women on the train, some simply sat behind handwritten signs, but her voice still rings in my ears. 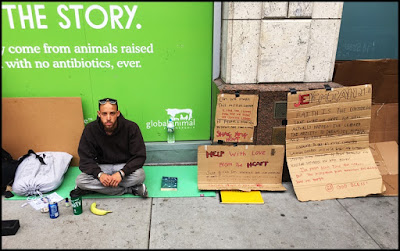 I met Jeremiah on 14th Street. His signs caught my attention...they were biblical passages with a message of hope. As I spoke with him I squatted down to be at his level—people rushed past—both of us invisible. He’s worried about his future, he told me, but he also has hope. That is what is really sustaining him, he also added, hope.

There was also David, who was sitting in a wheelchair at Union Square. He had no legs below his knees and his sign read, “Veteran. Please help.” I spoke with him very briefly and I felt tears welling in my eyes as I did. Though I am a pacifist I have the utmost respect for our soldiers that protect us. And now here one was on the street with no legs asking for money. When I put a couple dollars in his cup and thanked him for his service it felt trite. How arrogant of me, I thought, and I was fully conscious of my legs as I walked away. 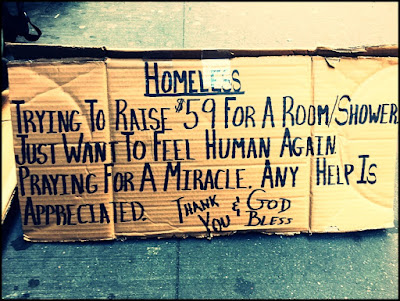 When I met Michael, who asked not to be photographed, he was sitting behind his sign on Broadway in Lower Manhattan, not far from Ground Zero. What caught my attention with him was one of the sentences on his sign, “Just want to feel human again.” This was the second time today someone made this reference to being human.

Michael was reading the Bible when I offered him a dollar. When he looked up to thank me I asked him what he was reading. Romans, he said with a smile. I told him that Romans 12:2 was one of my favorite passages and he quickly thumbed through his Bible to find it and recite it. He’s been on the street about 8 months he told me and is hopeful, but at the same time is finding it difficult to find work (I cannot imagine trying to find work without a place to live).

So, I question in this public place, why? Why do I feel the need to speak with street people? Is it because it makes me feel good? Possibly, at some lower psychological level, but I don’t think that’s it. Do I feel sorry for them? That’s not really it either (compassion would be a more appropriate word). I don’t know why, I really don’t. But when I think of all the people I’ve met over the years I do know that we are all children of the same source. And in some ways, I believe, that when I speak with people from all walks of life—and offer a little bit of myself—it makes us a little bit more human.