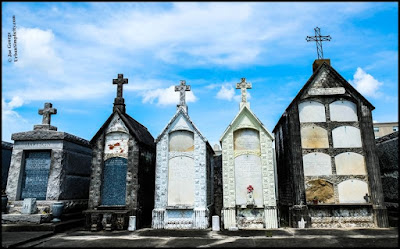 “We are making photographs to understand what our lives mean to us.”
— Ralph Hattersley

So I just returned from New Orleans. Well, two days ago. But in many ways the city is still with me. The uniqueness of the place has not fully sweat from my pores. This was my fourth or fifth time to New Orleans. The first time I was there was the late 80's when I lived and worked there for a very brief time. But I haven't been back in almost twenty years. I've also never been there during August. I was expecting the heat and humidity but nothing could have prepared me for it. As one local commented on the heat, "Yes, it pretty much sucks the oxygen out of the air." I had gone there for a bit of relaxation, and to take photos and drink beer. I accomplished all three.

Whenever  I find myself in an old historic city I can feel the ghosts of those before me (metaphorically, not literally). And  sometimes I'll create my own sort of walking tours. In Greenwich Village, for example, I did a bit of research and walked around to places where Khalil Gibran lived, worked, and drank. In San Fransisco I hunted the old beat hangouts of Kerouac. And thus on this trip I stalked E.J. Bellocq.

This at first may seem a bit pervy...a guy photographing prostitutes and not telling anyone about it. But it is the contrary. Yes of course some of the models are shown unclothed, but many were partially or fully clothed. He showed them in the places the lived and worked. In short, he showed their humanity. And it is beautiful. Keep in mind that while prostitution was legal having these photos at the time was not, they would have been considered pornographic and could have resulted in jail time at the very least, and even worse in many ways, personal and public disgrace. Click here to see a good representation of his work.

It's interesting to note that his photos were never developed in his lifetime. Plates of his photos were discovered in an old slave's quarters on St. Peter Street behind the Preservation of Jazz. Many of the plates were water damaged and some even had the faces of some of the models intentionally scratched away. There is a great article written at Exquisite Corpse that goes into this in more depth, to read that story, click here.

The morning after my arrival to New Orleans I headed out to St. Louis Cemetery #3 as this is where I had read that is remains were buried. I thought I'd pay him homage, but to no avail. On this day the temperature peaked in the mid 90's and at the cemetery there was no shade. It hurt to walk around. I often visit famed cemeteries in historic places and was surprised to find that not only was there no office to offer information there was no information to be had anywhere. There were a few tours going on and I interrupted them to ask information but no one could offer any. Seeing a worker's van down one of the long rows I approached it to find a man sleeping in the air conditioning. After startling him awake he did offer me general advice but nothing concrete. I approached another worker, this one spoke broken or at least heavy accented English. I am usually pretty good at picking up an accent upon hearing it but could not place this sweating and jovial man's language. It wasn't until he spoke into his walkie talkie that I realized he was speaking a form of French...Cajun French. But alas, still no info.

The cemetery is vast and as aforementioned has no shade so I began walking back towards the road to seek the shade of a tree. But not wanting to give up I googled additional info as I walked. Sweat was literally dripping from me and onto the screen of my iPhone. I emailed a person who had posted a picture of Bellocq's grave and surprisingly she emailed me back right away. Unfortunately she could not remember the exact location but only general area. I did go back and look again but to no avail (though I did find the family tomb of Chef Paul Prudomme). At any rate, with the risk of severe sunburn or heat collapse I left the cemetery but  know that I had likely walked right past his grave as they all look so similar.

Over the course of the next few evenings I did what I came here to do...walk around and take photos. The temperature would dip to about 80F in the evening so it was still rather stifling. As I  walked I'd make a point of stopping at addresses that were once home to Bellocq's studios...Rue Conti, Ursulines, Burgundy. And I'd try to  imaging what it must have been like to haul that heavy photography equipment of his day through this heavy heat.

As I walked I also thought about all the places I have been where I myself have walked at night with my camera on one shoulder, tripod on another, and a belly full of beer. In many this was a sort of deja vue as I had walked these same streets thirty years prior with a camera and tripod. In those days it was with my old 35mm camera, whose prints of that time are mostly lost or packed away in some box in an attic or closet in which I cannot find. When I was here during that time I was so young and had no idea of all that lay before me. I have done so much since then...have changed so much but at the same time am still very much the same. And it occurred to me as I walked that I was not only stalking the ghost of Bellocq but also that of my younger self.

To read a very nice article written about Bellocq for the Smithsonian, click here. 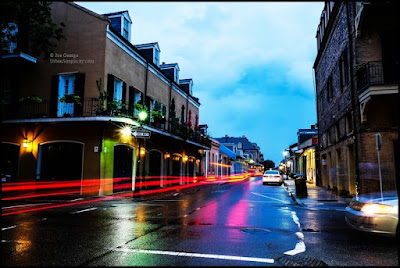 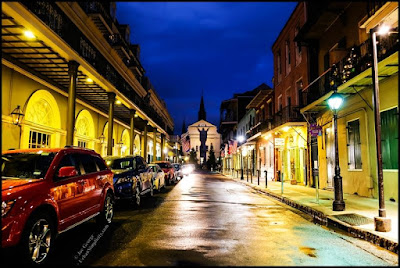