The Freedom Wall....is one of inspiration 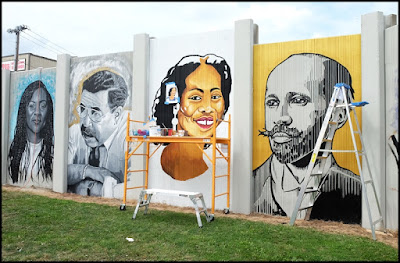 On my way home from work this afternoon I took the long way home to ride past this free-art project and see the progress. It is titled the Freedom Wall and is sponsored by the Albright-Knox Art Gallery. This, to me, in these uncertain times and with all the "wall building talk," it is so inspiring to see a wall such as this with a positive purpose. Here:s an excerpt from their website:

"This space provides the ideal surface for a mural that will respond to the significance of the location as the entrance into the Historic Corridor and that celebrates our nation’s civil rights legacy. The Freedom Wall project (working title) will utilize the design of the wall, divided into sections, to depict portraits of 28 notable civil rights leaders in American history, past and present. The scale of the wall creates a unique opportunity to present a historical narrative that recognizes well-known national activists alongside equally important but less-widely-known local leaders."

I was glad to see there were a few people working on the wall when I rode up to it, and they were all too eager to talk to me about it and tell me about some of what was going on. Directly below is one of the artists, Edreys Wajed, he's working on a portrait of William Wells Brown who spent some time in Buffalo at one point. The photo below is a nice young women who is not one of the artists but described herself as a helper, she helps the artists fill things in, she told me. She also gave me a great deal of information about the project. And in the photo directly below that is a rap artist who was being filmed performing in front of Dr. King. My bike made a cameo appearance in the very bottom photo :)

In all, there are 28 portraits being painted by four artists and the wall stretches around the corner for two city blocks. The project is slated to be completed in the next couple weeks and there will be an opening with a street party. This, to me, is really inspiring and worth pedaling a few blocks out of my way to pass it on my way to work.

To learn more about the project, the artists, and the list of people being portrayed, visit their web site here. For directions to the Freedom Wall, click here. 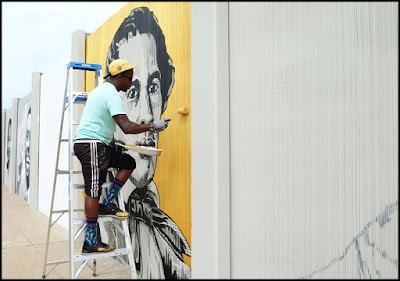 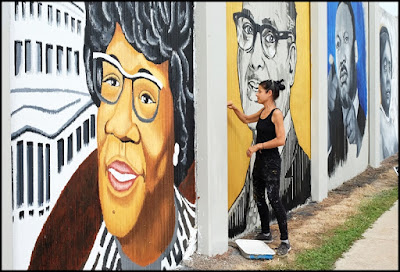 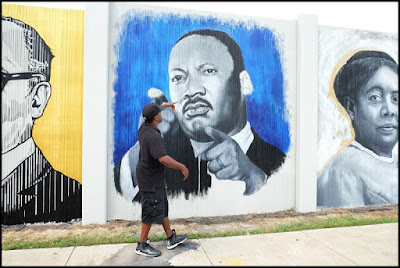 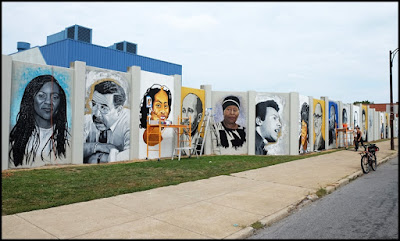