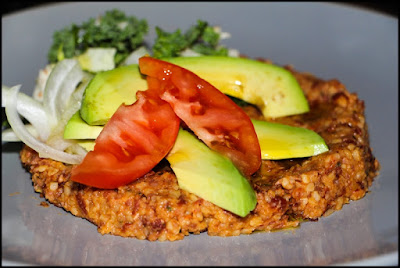 So this is a play on the national dish of Lebanon called kibbeh. There are plenty of vegetarian versions of this delicious recipe, but the traditional one usually includes lamb, and to get very traditional it is made with raw lamb and not cooked. Think of it as a sort of Middle Eastern steak tartar. Another common way this is made is shaped into balls, stuffed and fried. This said, the Arabic word kibbeh, I am told means ball, and the Arabic word nayeh means raw. This is the reason I have quotes on the title of this recipe, while it looks like raw kibbeh it is made with beans. Incidentally, though I haven't had it in many years, I grew up eating the raw stuff and it is super delicious. If you'd like to learn more about the raw version and why Lebanese like it so much, this is a good article. As for kibbeh in general, here's some additional info, this is from an article I wrote some years ago which was originally published at the website, Sally's Place:

The national dish of Lebanon is kibbeh, an emulsified paste of the freshest lamb and bulgur wheat. Think of kibbeh as a sort of Lebanese paté. Originally, kibbeh was made by pounding lamb with a jorn (mortar) and modaqqa (pestle), then kneading in spices and soaked bulgur. To some, that are unaccustomed to this procedure, this can be an unpleasant sight. The informative English food writer George Lassalle, in his book Middle Eastern Cuisine, East of Orphanides, describes kibbeh-making in the rural villages of Lebanon as "frightening." He found the incessant pounding and kneading of the meat and bulgur both dreary and alarming. With the advent of the electric grinder and food processor this ancient method of kibbeh-making has all but stopped, except in the most rural villages. Often in American cities with large Lebanese and Syrian populations you'll find butchers that specialize in "kibbeh meat": lamb that is ground two or three times to form an emulsification.

Kibbeh can take on many forms, the most famous being kibbeh nayee (raw kibbeh) which is somewhat like steak tartar. Two other common forms of the food are kibbeh bil-saneeya (baked kibbeh) and kibbeh rass (fried kibbeh), both of which usually contain a filling of cooked meat and pinenuts. Baked kibbeh is layered in a pan with its stuffing and drizzled with olive oil, while fried kibbeh is shaped into miniature hollowed out footballs and then stuffed before being fried. 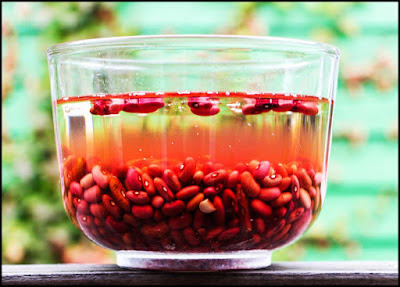 Combine the beans with 4 cups of cold water in a bowl, cover it and allow to soak at room temperature overnight.

Place the soaked beans in a pot and cover with fresh water. Bring the beans to a boil, then lower them to a simmer. Cook the beans for 1-2 hours, or until they are soft. During the cooking if too mach water evaporates add additional. Drain the beans and transfer them to a bowl.

Add the remaining ingredients to the bowl as well, the ½ cup cold water, onion, garlic, olive oil, lemon, mint, smoked paprika, cumin, allspice, kosher salt, and cayenne pepper. Mix everything together then transfer to a food processor. Process the kibbeh in pulses, until it is homogeneous but still coarse.

Transfer the kibbeh to a platter and smooth it out. Drizzle with virgin olive oil and garnish with your favorite ingredients. Serve this with traditional flat bread. The kibbeh can be eaten, hot, room temperature, or chilled. 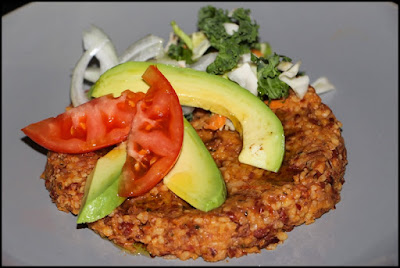