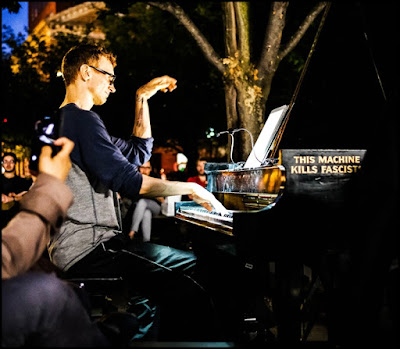 This is Colin Huggins, AKA the Piano Man of Washington Square Park. A classically trained pianist, and originally from Georgia, he has been busking in NYC parks with full-sized pianos for more than a decade. He began in Father Demo Square in the West Village, then moved on to Union Square but was asked to stop by local residents because of the crowds he drew. At one point he was fined $6000 (source: Wikipedia). These days one can find him in Washington Square Park nearly every weekend; he's there every time I visit the city, even in the cold moths. I've posted on him in the past because one of the things he does--or allows--is for people to crawl under his piano and lay there on mats (which he provides) to get a full concert sound. Anyhow, this photo was shot last night while he was playing his last song of the evening. Another thing that I think is pretty cool is the phrase which he has on both sides of his piano and is visible in this photo. It's the same phrase that Woody Guthrie scrawled on his guitar...This Machine Kills Fascists.