My New S.U.B (and how I built a stylish custom top deck for under twenty bucks) 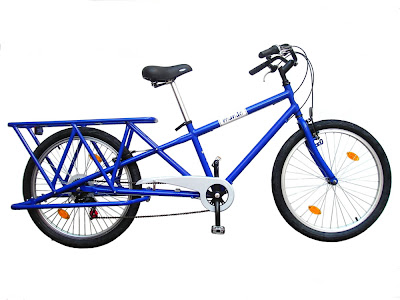 It was a little intimidating putting it together. I'm a pretty handy guy, but I've never put a bike together from scratch before, and that's basically what you have to do. There are assembly instructions to download from their website, but if you've ever tinkered with bikes before you should be able to figure it out.

Anyhow, the Mundo weighs a ton (the website says it weighs 59 pounds, but it feels heavier than that to me), but the ride is incredible. It feels like a tank. The upright position offers extreme comfort. To some the length may seem a little awkward at first, but I'm used to it as one of my other bikes is a tandem. The gearing seems good, and once you get rolling you'd never know that you were on a longtail bike or that you may or may not be carrying a load. I own a trailer, but this is different. My trailer is great for smaller loads that may have a lot of loose items, such as groceries, but it is not suited to carry large, heavy, or bulky loads, such as lumber, for example.

Here's a couple pictures of my trial run today. On the right side of the bike are two sheets of wood measuring 2 by 4 feet each; one is a piece of plywood I used to make a top deck for the Mundo (see below) and the other is a 3/4 inch thick slab of solid pressed pine which I'm using as a kitchen counter. 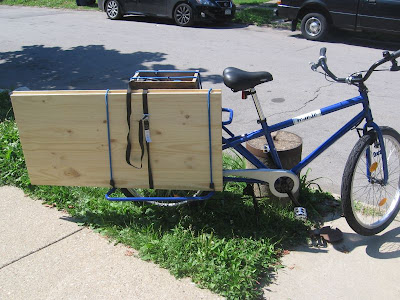 Here's a view of the left side. Though the box on the bottom runner looks like a case of vodka, it's actually a mixed case of wine (hey, I get thirsty after a long ride), and as anyone knows, liquids are heavy. The box on top is serving as a sort of trunk for loose items...a few tools, a couple bottles of water (it was 85F and humid today), extra bungees, etc. 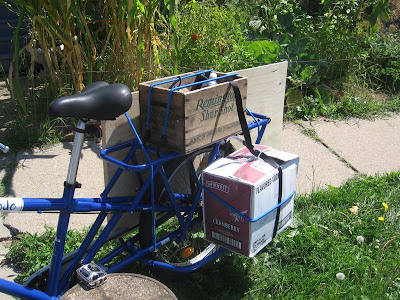 I have to say, that the ride did not change that much with all that stuff loaded on: this bike is truly solid. Yes, of course, I was aware of the load, but it was pretty tightly strapped and I was careful of potholes. While my trailer may be better at hauling groceries, there's no way it could have hauled this (and almost effortlessly). There was not sway, I banked like I normally would, etc. This bike is solid.

Anyhow, with that said, one thing that I feel should be standard with the bike is a top deck. Both the Kona Ute and Xtra Cycle come standard with one. But given that fact, and also that I have not ridden either of the aforementioned bikes, I still feel that the Mundo is not only stronger and more utilitarian, but also a better deal. Anyhow, I set out to build a top deck and did it for under twenty dollars.

I initially got some ideas from these pages: one and two. Both of these looked great and offered excellent ideas, but I wanted specific things. Firstly, I knew that I wanted a deck that did not look as if it were simply a board screwed to the frame, and secondly, I wanted to still be able to access not only the outside frame bars, but also the cross bars as well (for use with bungees). This is what I came up with:

I chose to use plywood over a solid board for a couple reasons. The main reason is the thickness. As previously mentioned I didn't want it to look like just a board screwed to the bike, and part of the reason it would look like this is the thickness of the board. With plywood you have other options. I chose to use 3/8 inch thickness. The solid board will be stronger, but I really feel the plywood is fine because the crossbars on the bike are what really carry the brunt of the weight, not the deck. The deck is just there to keep things in place.

Anyhow, I hauled home the piece of wood and measured and penciled a section 7 by 30 inches. I cu t it to this size (which is slightly smaller than the rear rack) so that I would still have access to the frame for bungees. 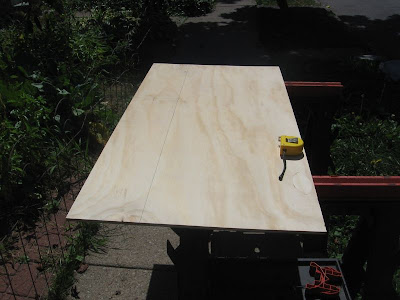 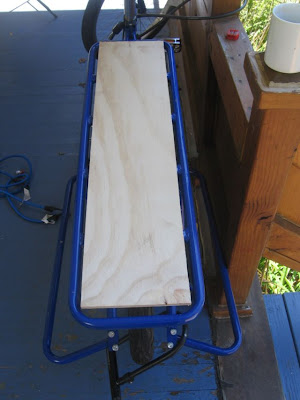 After determining that it was indeed the right size, I cut the corners off to match the shape of the rack. 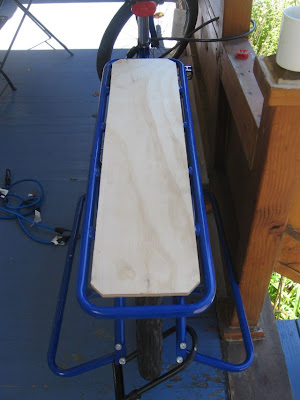 Then, using an electric sander, rounded them out, and sanded the entire thing smooth. 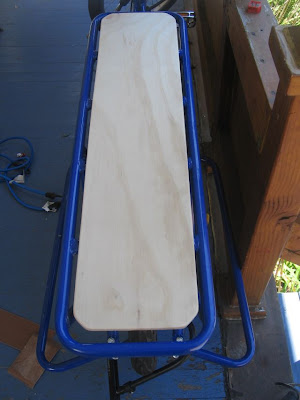 Next I measured and traced both the top and bottom, so I knew where to cut the access holes and drill the mounts. 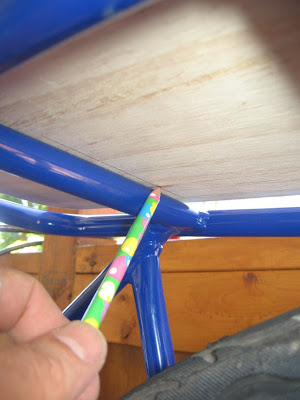 I then cut out 1 1/2 inch sections with a drill with a boring attachment (it's the same attachment you use when installing a doorknob...it's simple to do and the tool is inexpensive). 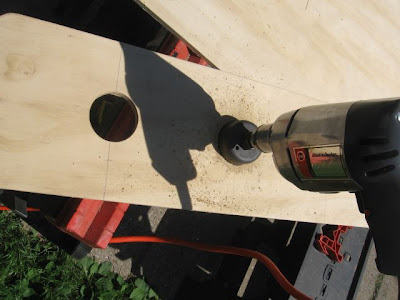 I crossed my fingers and placed the deck back on the bike...my measurements were correct, each hole was perfectly over a crossbar. 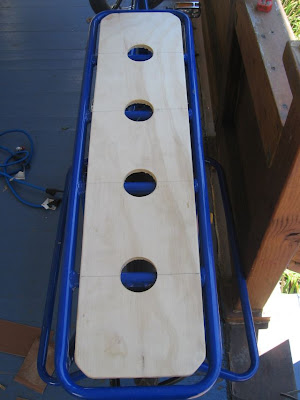 Then I put 1/2 inch copper pipe mounts on the original measurements (you don't have to use copper, I just like how it looks. Aluminium would work fine, as would plastic conduit mounts). I marked them and drilled holes for screws. 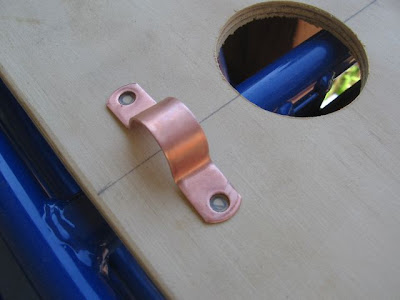 After drilling the holes I sanded and pencil markings off the deck and gave it a few coats of polyurethane to seal the wood...it dried in minutes in the hot sun. 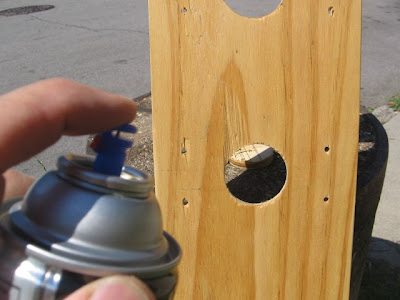 To mount the deck I used 8-32 x 3/4" flat machine head screws. The heads recessed naturally into the wood, giving the surface of the deck a smooth finish. 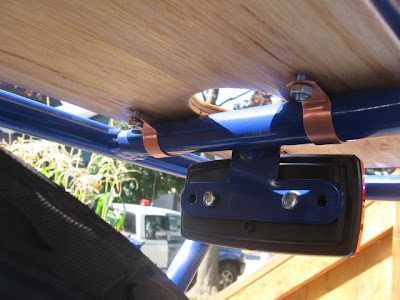 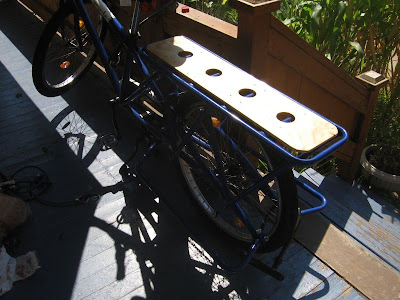 Here's a couple pictures of a crossbar and sidebar with a bungee attached...isn't it awesome when things work out in real life like you plan them in your head. 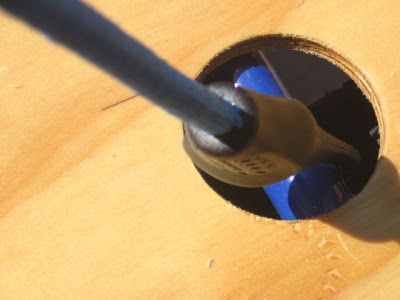 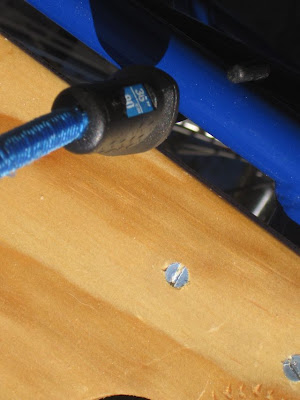 Anonymous said…
Beautiful Deck Joe. I'm sure a lot of Mundo riders out there would love to see that. We will promote your post and your link.
Enjoy the ride.
Ben
September 4, 2008 at 3:47 PM

Mogolife said…
Great blog. Our family is moving toward being car-free. A utility bike or two is definitely in order. Very creative way to attach a board while maintaining bungee cord capability. I am impressed with your ideanad the ease with which you implemented it.
-liz
March 31, 2009 at 11:09 AM

Jim said…
Great work... I will have to do the same on my Mundo as a plank two cushions and a bungee rope is not ideal for 3 kiddies on the back.
Not sure I am as handy with wood as you though.

Matthew said…
Very nice I might have to do this on my Version 1 Yuba Mundo.
-Matthew

Thanks, and I enjoyed your blog as well. I've since moved on to a v3 Mundo. I see that you are a photographer and astronomer...you may enjoy some of my other posts on those subjects. Thanks for visiting and commenting.
March 10, 2012 at 9:28 PM