James the Incredible Human iPod (and an additional photo) 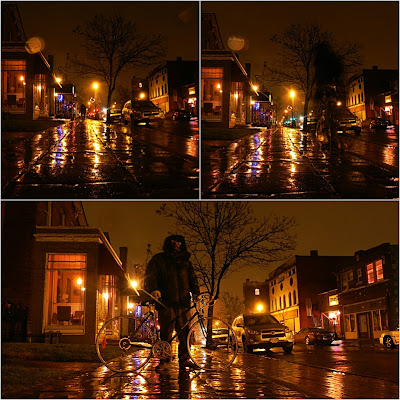 So this is interesting. I had just left work after working a split shift. I didn't face a stove all of the day but much of it. When I came outdoors the fresh air felt good and it felt good to be on foot, but I was surprised to see that there was a combination of snow and rain...we haven't had any real snow this year. As I was walking down Allen Street I noticed how the light shone off the wet sidewalk and I had my camera with me so decided to take a couple shots. Being on foot, opposed to being on a bike, I had to set the little tripod on the ground, which gives it an interesting perspective. Anyhow, as I was taking the photos a guy appears out of seemingly nowhere...shows up in the frame and just sort of posed there with his bike. I look up from the camera and he says to me, "You ever hear of the incredible human iPod?" "Um, no." I reply. "Then you can't be from around here," he says. "What's your favorite song," he asks. And without waiting for a reply he says that he knows I like Fleetwood Mac because everyone likes Fleetwood Mac, and he starts singing One Winged Dove as loud as he could...he's singing it in the picture above. To make a long story short, James walked with me for about a block or so while we talked about riding bikes in foul weather, and it was then that I noticed he had two flat tires and he asked me for money (I had none with me otherwise I would have given him some). The interesting thing is that he rode up to me (on two flats). I didn't notice it at first because, as I mentioned earlier, he just showed up in the frame. But after getting home and uploading them I could see him approaching on his bike like an apparition (in the upper left photo he's in the distance and the upper right he's a blur while getting off the bike). I just find it interesting that I--being interested in bicycles and taking photos--have this guy just show up and step in front of my lens and pose with his bike. One never knows what they'll see when on bike or foot. Also, I thought I'd share the below photo I took yesterday...Days Park at night (click either photo for a larger view).

Anonymous said…
Aw, your first encounter with iPod! I'm a little surprised you haven't come across him before, actually. I'm just glad he's alive, I think I've seen him get choked out like three times.
December 28, 2011 at 5:55 PM

Joe said…
Anonymous, I have encountered him a few times prior...but at a distance (hearing him sing as loud as he could). But last night was the first time I spoke to him, and it was a little alarming how he just appeared before me as I was taking photos (I never asked him to pose for the shot...he just jumped right it). And I saw him once, from across the street, almost get beat up for singing at people that didn't appreciate it. Thanks for visiting.
December 28, 2011 at 8:33 PM