Five Photos of NYC (with a few words) 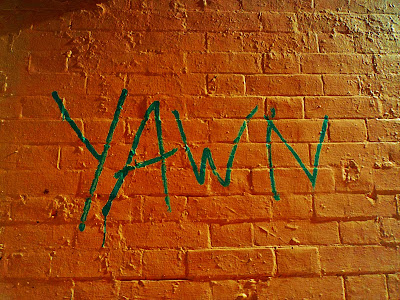 You've probably gathered by now that I enjoy taking urban photography. The opportunity is seemingly limitless, even in my tiny hometown. But I was in NYC this weekend--just a quick overnight jaunt--and was like a kid in a candy store...I see art and photos almost everywhere I look and have to consciously put my camera away now-and-again, lest I look like a tourist (egad). Anyhow, here's a brief background on these photos.

I sometimes enjoy graffiti, and the image above I think is awesome. It's painted on the outside of the Back Fence, a bar in Greenwich Village (which I've been known to visit)...it's one of the most interesting neighborhoods in the world and in one of the most exciting cities in the world (in this bloggers opinion), and someone just scrawls, YAWN. I had to laugh to myself...and that's all that was on the wall so I had to take it's picture.

The next two photos (immediately below) were both taken on Sixth Avenue. The one just below was taken first, at dusk, and it looked to me then--just as it does to me now--to be an urban canyon...dark canyon walls with glowing light eking down from above. The next one is a former church that I have dubbed the Church of Consumerism...it has been turned into a series of stores some years ago--you can now purchase clothing in what was once the church's sanctuary--and correct me if I'm wrong, but I also think it was a night club some years ago (I think I have been there but not sure).

The bottom two pictures are related, sort of. Earlier in the day I had read that there was going to be an Occupy Wall Street gathering in Washington Square Park so I made a point to visit. Seems like the movement has lost most of its steam but there were still a few dozen souls giving it all they had. Because it was publicized there were also a lot of police there, flanking the entire park at every entrance. Anyhow, as I was exiting the park I saw the three police officers standing there as you seem them in the photo. It looked like such a classic New York scene to me that--rather unlike myself--I asked if I could take their photo. I explained that I wasn't a journalist, just a guy who likes to take photos. The two guys on the right were fine with it, but if you see the look on the guy's face on the left you can see he is not...he wouldn't even look at me, just clench his jaw tighter as I spoke to him (and I really wondered what they all had in those pouches hanging on their sides...made me a little nervous actually). Anyhow, I told him--as he still looked away--it's OK if you say no (to having his picture taken), I won't be offended. After an awkward few seconds silence, the guy in the middle says, no problem, take the photo. So I did. And then thanked them for allowing me to do so.  As usual, click any photo for a larger view. 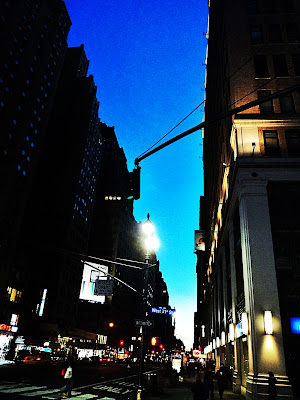 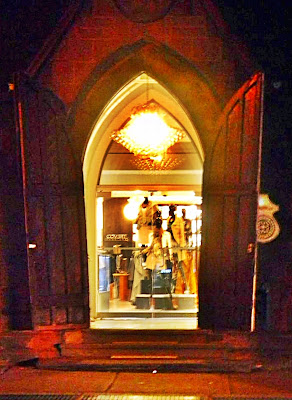 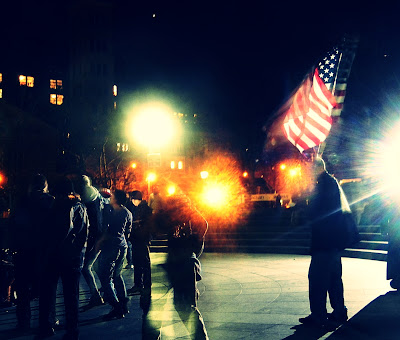 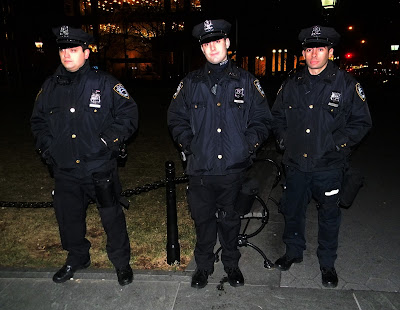 Unknown said…
OMG - what did they do to the Limelight?

kfg said…
Never went to the Limelight. I'm more a Bitter End, CB's Gallery kinda guy. I also like the Baggot Inn on Third at the park.

"I really wondered what they all had in those pouches . . ."

The big one is a gas cannister. One of the little ones is a taser reload. Feel better now?

Joe said…
KFG...I'm actually more of a CBGB's/Mud Club sort of guy myself. These days I find myself most comfortable corner bars--such as the Back Fence. But in my "stupid crazy younger days," I would follow anyone to nearly any bar...hence not quite remembering--or at least having vague memories of--the Limelight. And yea..I was guessing the were teargas/taser/implements of minor destruction..no, not feeling better. And after visiting NYC and T.O both twice in the last month...Bflo feels tiny (but sort of like a borough separated by a really long subway ride).
January 31, 2012 at 10:51 PM